April 17th, 2017
“I couldn’t care less about the world” is a line from Sibylle Berg’s piece “Und dann kam Mirna”, which I’m reading in a overcrowded ICE train on Easter Monday just one night after the “Evet!”, the “Yes!” to the constitutional referendum in Turkey. I’m traveling from Cologne to Berlin to see “Und dann kam Mirna” at the Maxim Gorki Theater in a production by Sebastian Nübling. Couldn’t I care less about the world either? From the perspective of an intellectual, I think I cannot be indifferent to a world in which academic research is controlled by the state. The Mirnas of today still wouldn’t care less. I ask myself: is indifference the new lightheartedness?

That night, I listen to a choir of Mirnas saying: “Theater studies. Dance. Curating – occupations for people without special interests. […] The only thing that we trust is our intellect. It’s stable, while everything around us is in motion. Civil wars, terrorist attacks, strange family relationships. We trust ourselves, we are the smart ones returning to 1.0.” In the world of the world-wide-web, the step from 2.0 back to 1.0 means replacing the “many-to-many-show” with a “one-to-many-show”. It seems as if the “one-to-many-show” is currently gaining in popularity as the governing principle. I ask myself: is passivity the new lightheartedness? Read more Sibylle Berg!

And I wildly think one step further: science has lost the bricolage, the improvisation. I advocate more aberration. Legalize the aberration! Encourage magical thinking! Especially in academic practice! 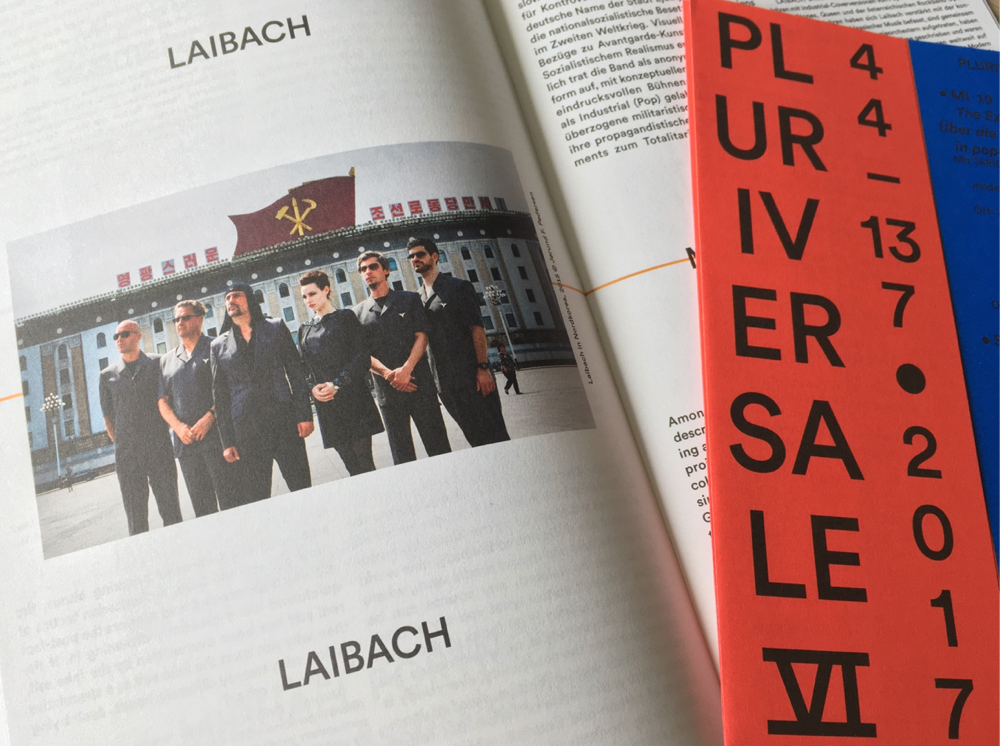 The PLURIVERSALE VI at the Academy of the Arts of the World in 2017 is under the motto: the new left and the old right. Asking: in what ways have the categories of “right” and “left” become meaningless? Is the political landscape disintegrating into a hotchpotch of rival camps? I have tickets for a concert by the Slovenian collective Laibach, whose fascist stage aesthetic has raised controversy since their founding in 1980. Laibach’s political position: “We are fascists as much as Hitler was a painter.”

A mix of “Tanz mit Laibach” and DAF’s “Tanz den Mussolini” buzzes through my head and in my ears, as I set out to the Volksbühne at the Rudolfplatz, Cologne. I dance with Laibach, motionless on the outside, extremely agitated on the inside, and I listen to Laibach’s eurovisions, more precisely: their song “Eurovision”:

I think to myself that, in the age of Trump, Erdogan, Putin and Orban, pop concerts can, of course, only be staged as totalitarian spectacles. This is the only way - to my mind - for pop to be cheek to jowl and not distant from the present. This is the only way that pop, to my mind, can be more than pure distraction … my thoughts dance with Laibach …

… and later with Björk: I see the Icelandic artist in my mind’s eye surrounded by jellyfish in her music video “Oceania”: “One breath away from Mother Oceania” ...

Be it totalitarian spectacle or propaganda love of nature, pop needs to be more political again!

April 20th, 2017
Adolf Hitler would have turned 128 years old today … I risk a web analysis and am greeted by culinary finds: either “Eiernockerl” (flour dumplings with egg” or “Schnitzel” (fried cutlet) for unbeatable 8,88 euro – the number 88 is used by neo-Nazis as a covert Hitler salute –, of course, even dictators have a favorite dish … but the Führer’s birthday also gives rise to thought experiments à la “What if Adolf hadn’t survived childhood …?”

Careful! This is a student-made commercial from a film academy. There is no connection to Mercedes Benz:

April 21st, 2017
One day before the AfD political convention at the Maritim Hotel in Cologne. Cologne is already in an uproar today. Even the pigeons: a dull thud over me, dead pigeon from above: 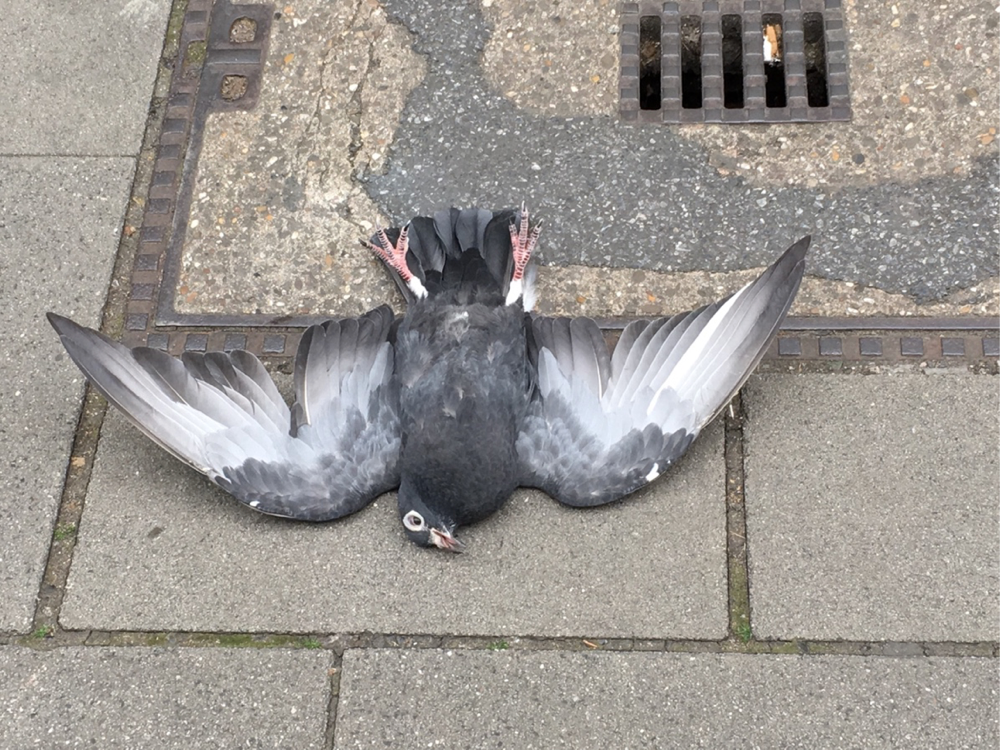 April 22nd, 2017
I’m thinking, not about the AfD, but about the relationship between people and animals: why do we look at animals, I ask myself, citing John Berger. Next question: do animals – apart from household pets – look at us? Does the tiger in the cage return my gaze? According to Berger, the zoological garden is a monument to the impossibility of such encounters: the predator as peripheral figure, who shies away from the center of the zoological stage. Eye contact impossible. Artistic rock formations as theatrical scenery. The cage as a peep show. Zoo as anti-theater? 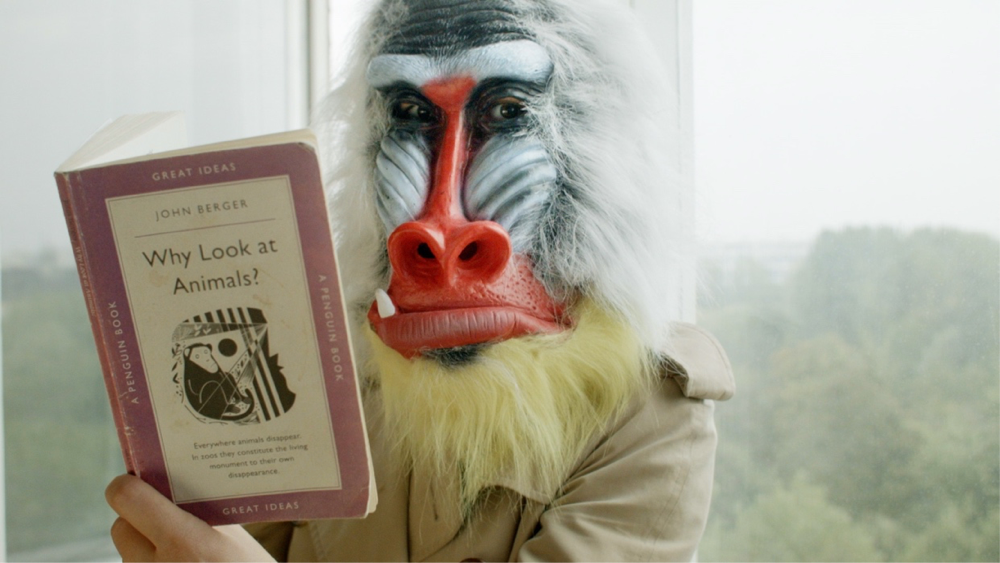 April 23rd, 2017
France votes: Macron and Le Pen. According to Didier Eribon it is not a question of “or”: Macron with his neoliberal line of social democracy is ultimately exactly part of the phenomenon, which has facilitated the rise of Le Pen.

Meanwhile Sibylle Berg is thinking about the free TV premiere of “Fifty Shades of Grey” and how the film could really have been something: “Grey with long red hair, black clothes and a fetish for bird-watching – that would have been something”.

Verena Meis is a literature and theater scientist. After studying she started as a scientific assistant at the institute for German Philology at the Heinrich-Heine-Universität Düsseldorf. Her main research are performance, contemporary theater, human-animal relationships and pop culture. She is founder of Quallenistitut and theater salon “AusReihe3” and also member of the advisory council for dance and theater of the regional capital Düsseldorf.