I’ve made a list of film and TV mother figures, who interest or impress me. It is a surprisingly short list. At the top: Miranda from “Sex and the City”: a single mom, lawyer, with a nanny and a housekeeper. My favorite scene is when she reluctantly decides to work less in order to have more time for her child. Miranda to her boss: “I have to cut way back... to 50 hours a week... 55 tops!”. Next is Lorelai Gilmore from “Gilmore Girls” (queen of children’s birthday parties) and Carol from “The Walking Dead” (the sole survivor of the zombie apocalypse in her family). After giving it some more thought, Rita from the series “Dexter” also comes to mind: mother of two children from an abusive ex-husband, one from a charmingly pleasant serial killer, who (attention: spoiler alert!) is ultimately murdered by an unpleasant serial killer.

Since the baby came, I am able to imagine things that I never before believed in or haven’t for quite some time. For example, that a full moon influences the health of human beings (I have no other explanation for the fact that the baby screamed pitifully for days and then became entirely peaceful again.) During a stroll, I take a photograph of our neighborhood church’s times of worship. On Sunday, they have a “Poetic Evening Service”. Maybe I’ll go before the TV duel, maybe not. Perhaps, it will help me better recall the lyrics of well-known songs. Most lullabies have something to do with God. If not in the first lines, then often in the second, less well-known ones. I always only know the first few lines of every song: The moon has risen…, Dear Moon, you go so quietly through the evening clouds…, Do you know how many stars there are in the wide blue sky… I’ve begun googling the complete lyrics and learning them by heart. (Otherwise, it gets boring after at least the 20th time). It’s very surprising how religious most are further down the line – and how brutal, in some cases. But I’ve also come across a very beautiful text, the umpteenth line of “Der Mond is aufgegangen” (“The Moon Has Risen” by Matthias Claudius).

Behold the moon – and wonder
why half of her stands yonder,
yet she is round and fair.
We are the ones who're fooling
'cause we are ridiculing
as our minds are unaware.

The baby likes the song. As do I.

The baby is a boy. During the last week before he was born, I read Jack Urwin’s book "Man Up. Surviving Modern Masculinity”. According to this book, the child is a member of an endangered species. Statistically, men die earlier, are more likely to become victims (and perpetrators) of violence, land in prison and commit suicide more often. I am under the impression that little boys are even more limited in their possibilities than girls. Girls have more colors and carnival costumes to choose from and more choices of what to become in life. “One is not born a man, one becomes a man” or something like that. While, on the other hand, my baby can expect to earn more at some point in his future than his former female playmates. I decide to get a book about gender-sensitive parenting (ideally an audio book). The drugstore has three different packs of pacifiers: pink with hearts and butterflies, blue with ice bears and stars and green-white with bunnies and dots. I buy all three and strategically distribute the pacifiers at important spots all over the flat (beside the bed, the changing table, the cradle, the couch, the dish washer). In case, the baby starts crying and we quickly need one on hand.

The baby is breastfed. (Which is why I only manage to discover this flaming political article on the subject in the ZEIT on Saturday, when the baby is snuggling with his father and I have a moment to myself.) Seven to ten-times both day and night. On hot days such as this week, sometimes every hour. In a waiting room magazine, a list of the nutrients contained in breast milk fills half the page – beside it, a list of the nutrients in industrial formula fill one meager column. I got it: breastfeeding is healthy. And it is a public act, even when it takes place at home on the couch. I can be proud of myself for breastfeeding. Women, who decide against it or who aren’t able to do so, should be ashamed. My body, my rights! My ass...

On the same topic in English: theatlantic.com

On baby and mama products, they always print these photos of beaming, freshly showered mothers with their clean, happy babies. (How do they take such pictures, anyway?) I imagine these images being switched and there being little screaming baby faces everywhere. Bright red faces, screaming little mouths, angry looks. That is the image that I often fall asleep to now. My baby smiles too. Sometimes it even practices laughing, but more often than not, it screams at the tops of its lungs and I randomly interpret the sound: I’m hungry, tired, I have a bellyache, it’s a full moon? Depending on the time of day, I know what to do – or I don’t. And always there is this horrible guilty conscience, when the process of interpretation takes too long or I simply can’t think of anything to counteract the crying. In such cases, I always ask myself whether it’s the same for others and I am convinced that I am the only one with a screaming baby in a world full of sweet little dolls. Pictures of shrieking babies on nursing pads, breast pumps and baby brochures would help me a lot. 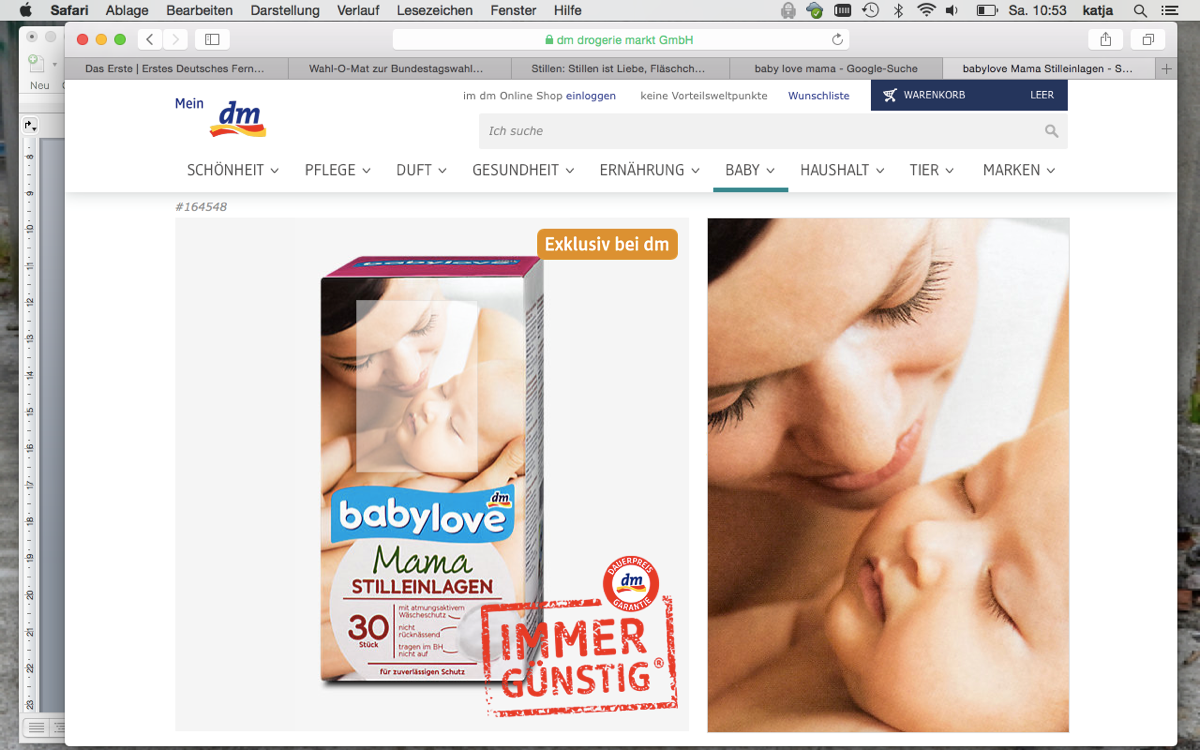 The baby is asleep. I bolt down dinner (you never know for how long the peaceful state will last) and click my way through the “Wahl-O-Mat” election website. “Child benefits should only be paid to German families” (Hogwash.) “Children should be vaccinated against contagious diseases” (Of course.) “Parents should be legally entitled to all-day child care until the end of primary school.” (Yes, please! And the professional full-time care should be worth its weight in gold, please.) In the end, I have a 85% match with the political party that always tops the chart for me (and which probably doesn’t have a chance) and am shocked by my 31% match with the AfD. It’s probably like my mother’s friend (school principal, SPD member, role model) said: you never find a 100% match with a single party. Nor a 100% difference.

I listen to a lot more radio now. It leaves the hands free and you can listen to the news while walking back and forth in the apartment. When the baby falls asleep on my belly and phone, book, newspaper and laptop are just out of reach, I still get a bit of entertainment and information. So, this week I heard a lot about the Diesel affair again; surprisingly, experts on the subject of facial expressions were questioned a lot (in order to be able to pay attention not only to what is being said, but also to be able to decipher the secret messages on Sunday during the TV duel); on Wednesday, there were discussions about the first day of school (apparently, the first day of school has deteriorated into a family event with clowns and fancy cake and the schools are forced to insist on first-graders only bringing along one school cone) and finally the news item that I can’t get out of my head: in the greater Aachen area (next door, so to say) they are now distributing free iodine tablets, so that people are at least armed against one type of cancer in case of an nuclear accident in the Tihange power plant in Belgium. When I was a baby, we had the nuclear catastrophe in Chernobyl. When I was a child, there was always a holiday group of children from the contaminated region visiting us in summer. The church parish organized a health stay for them. Many of those children are now dead.

As we enter the Christus Church (I’m constantly late now with the baby) they are singing “Father and Son”. “It’s now time to make a change. Just relax, take it easy.” The theme of the evening is “Fathers”. Musically featuring Pearl Jam, Erste Allgemeine Verunsicherung and aforementioned Cat Stevens. But also “Von guten Mächten wunderbar geborgen”*. On a late sunny, summer evening with a street festival in the neighborhood and television debate going on, there are about as many people sitting in church as would be expected in a theater. The pastor plays saxophone and drinks Fritz soda. A grey-haired man in the last queue keeps putting in his two cents. Three children are playing, cooing, staring around in amazement or sleeping. “If you need help falling asleep, I recommend that you watch the TV duel”, says the pastor (ca. my age) as a last farewell. And that is exactly what happens. I keep thinking of the expression “father of the nation” – or rather mother of the nation. According to the polls, it will be the latter and by the next election, the baby will already have turned four.

*“By loving forces...” is a famous poem by Dietrich Bonhoeffer, evangelical theologian and member of the anti-Nazi resistance movement. Translation of entire poem and melody

Katja Grawinkel-Claassen is a dramaturge with a strong focus on Audience Development at FFT Düsseldorf. She also teaches at the Hochschule Düsseldorf and the Heinrich-Heine-University Düsseldorf. She worked with the German-Swiss theater group Schauplatz International, and wrote e.g. for the taz, the Freitag, as well as for radio. Before all that, she studied media and cultural studies in Düsseldorf and Potsdam. Katja is currently on “parental leave” after the birth of her son.