April 24, 2017
Few days ago I read somewhere that one of the former US Secretary had a peculiar habit. He used to spend an hour behind closed doors of his office and think. Only two people could interrupt him: The President and his wife (of the Secretary). In fact, it was not a bad idea at all, but somehow, I was thinking, not quite realistic considering my circumstances. It’s not that I spend the entire day working, and I often spend my days wandering in cafés with friends, but in days such as this one I can hardly find time to think.

After not so quit night’s sleep, I start my day meeting with the Hungarian director from Serbia, Andras Urban. He is directing my play, “Bordel Ballkan,” at the National Theater of Kosovo. The play will be premiered on Friday, April 28. And while I was at the theater I happened to notice a letter that the theater was sending to Kosovo Police, asking them to be present and protect both the audience and the actors at the premiere on April 28 and its rerun the next day.

Someone wrote on Facebook that with this result of elections in France, there is hope for Europe. Here, this is good news, I say.

April 25, 2017
It happens to me often, say, to have to submit a draft of my play in a couple of weeks. And I say to myself: oh, there is so little time, I won’t make it. And then, as if this weren’t enough, another immediate thing comes up that must be done just now, quickly. And as if this weren’t enough, another request comes up – to write a text - that, for a million reasons I cannot refuse, and the text must be done now, right now. Everything becomes a mess. And I say: no, there’s no way I’ll make it.

And the days go by, things get done, the play is done on time, the text is ready on time, and even that other text is written on time. And a peaceful period follows, when I can take a deep breath. But then again, another hectic period of deadlines… If you look at it from a distance, everything looks like a routine. A routine of a writer in Kosovo and I guess, elsewhere.

April 26, 2017
When we travel in different festivals and other international presentations with the plays we produce in Qendra Multimedia where I work, we are often asked whether we are censured in Kosovo or whether we have problems of that nature. Of course, in some instances we have faced the “classic” censorship, but state censorship towards us is applied more sophisticatedly – by denying us public funds.

Yesterday, when the Ministry of Culture published the list of beneficiaries, Qendra Multimedia was not there. Neither was there the International Literature Festival – polip. The festival this year marks its 7th edition. Around 200 local and international writers have been part of this festival – the first and the only one of its kind in Prishtina.

By midday, I write a harsh public letter, titled “Khmer Rouges of the Ministry of Culture.”

This is how the letter ends:

“We consider such treatment and attitude of the Ministry of Culture towards Qendra Multimedia work and activities as censorship and an attempt to shun us. And in this hustle to put an end to our activities and our engagement they will certainly loose, we know this, and we are sure that they know this too.”

April 27, 2017
At 11:00, we are holding a press conference in the National Theater before the premiere of “Bordel Ballkan”. An hour later, a group of 6-7 people from the Organization of Kosovo Liberation Army War Veterans come in the theater. They seem tense. They want to suspend the play because, as they said, they heard it insults the “national values” and “war values.” I try to explain to them the issue of “creative freedom and such things, but everything is in vain. They ask to read the “play” and become even more tense when I told them they should come see the play. The meeting does not take long. They leave the theater threatening us that they will not allow this play to be performed tomorrow. On their way out, I receive a death threat. Nevertheless, I am happy they did not assault me physically. Of course, both the management team, actors and myself take their threats seriously.

And as we were reporting the case in the police, War Veterans Organization (OVL) sent a statement to media, which, among others, said:

“The WVO reacts against the ‘Bordel Balkan’ play by author Jeton Neziraj and a Serb director… […] This reaction comes as a result of information that we have that the play denigrates the war of the KLA and our national values are bastardized, and we met with the author of the so-called play and he refused to show us the script…[..] We call upon the public to not go to this play which makes fun of our national values. We as KLA will block it tomorrow,” 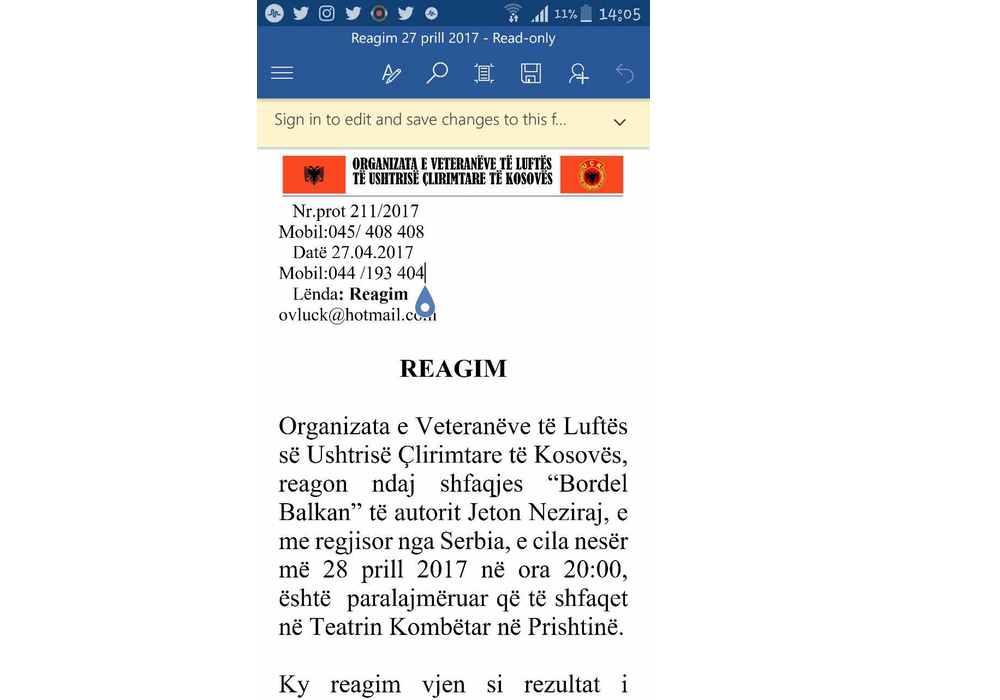 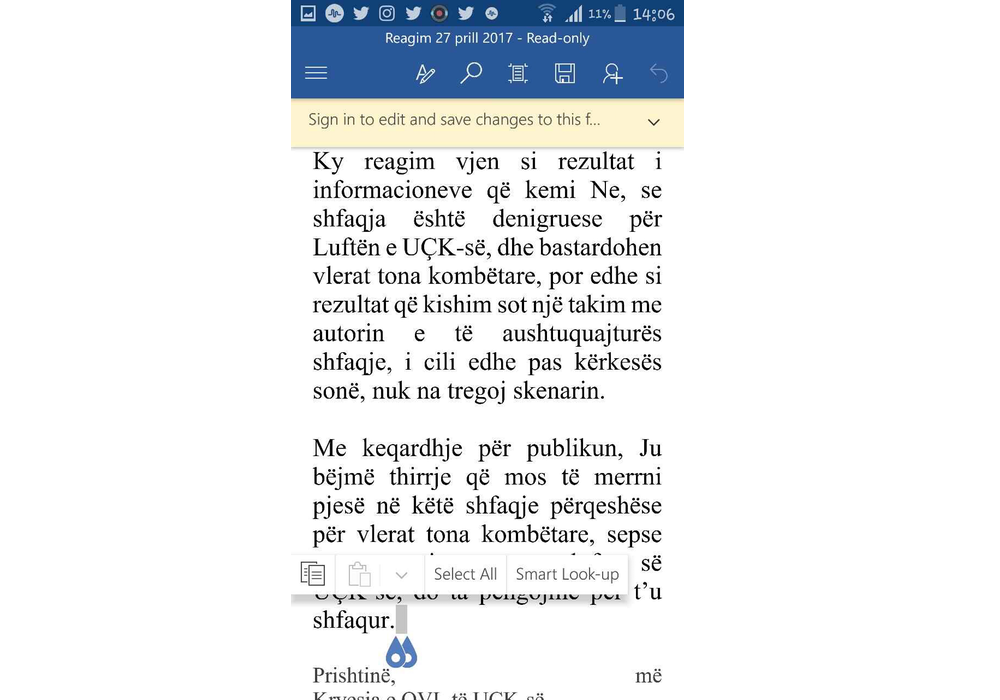 The Pandora box is opened. I am overflown by media request to comment on this statement. First I call my family and tell them not to worry. Then I write a quick explanatory response and send it to all media.

“A group of war veterans came to the National Theatre and made it clear through threats and insults that they will block the premiere tomorrow. They made death threats, among other things. [..] This premature reaction implies that they are manipulated by someone who wants to create a unrepairable scandal around this play and return this country to darkness where, among other things, aesthetic values and standards of theater are designated by unprofessional people. I would like to invite the public to come to the premiere and support the play – this should be a battle that concerns all of us, a battle of the people who want freedom of creativity, freedom of speech to be above threats and blackmail and calls for killing,”

April 28, 2017
I slept very little. A long day is ahead of me. Media pressure is extraordinary. They all want statements and ‘live’ reports. Andres Urban and the actors rehearse today as well.
People who support us publicly are many. And this makes us stronger and more determined. Strong support comes from media as well. At lunchtime, I meet with one representative of war veterans. They had given up their intentions to stop the play. I don’t understand what made them give up– media pressure perhaps? In front of the media they try to ‘justify’ themselves and explain the whole situation as a “misunderstanding”. Things seem more optimistic than the previous day, but with all this mess, we can expect anything. In the afternoon the police visit the theater, carry out a control and make a plan of security. In the evening, the audience start coming. They are the common theater audience, but other came as well to support us with their presence. The theater is filled with audience and police officers. More police officers are outside the building. Someone told that KFOR (NATO forces in Kosovo) are also behind the building, ready to intervene. Janko Ljumovic, Minister of Culture of Montenegro and Kujtim Shala, Minister of Culture of Kosovo are also present. Kosovo Ministry of Culture earlier sent a media statement supporting the National Theater and the play.
The play starts.
The play ends.
No incident.
A theater triumph, I say. 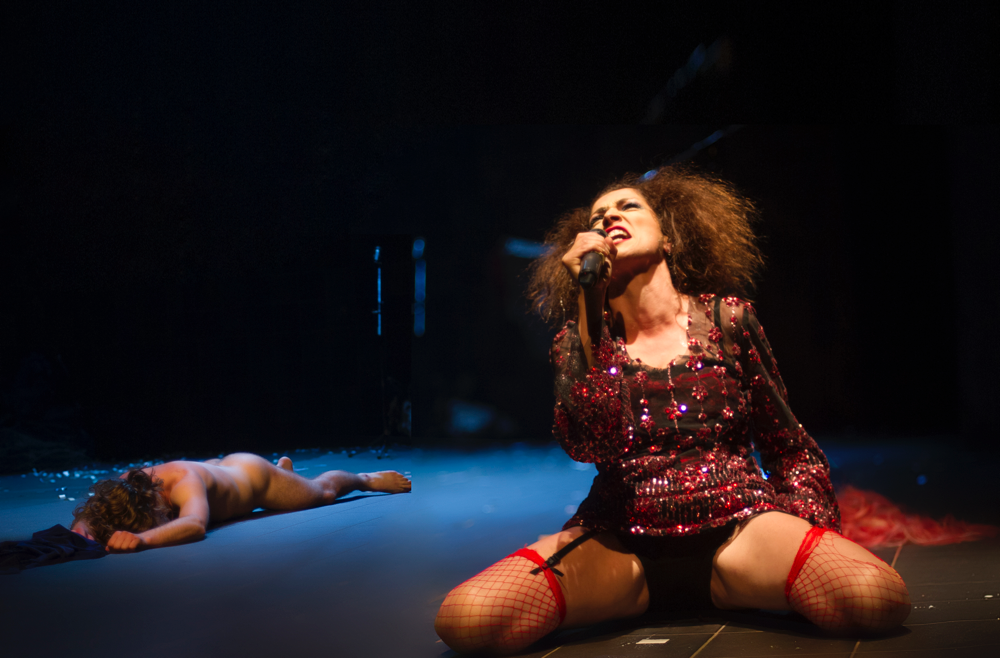 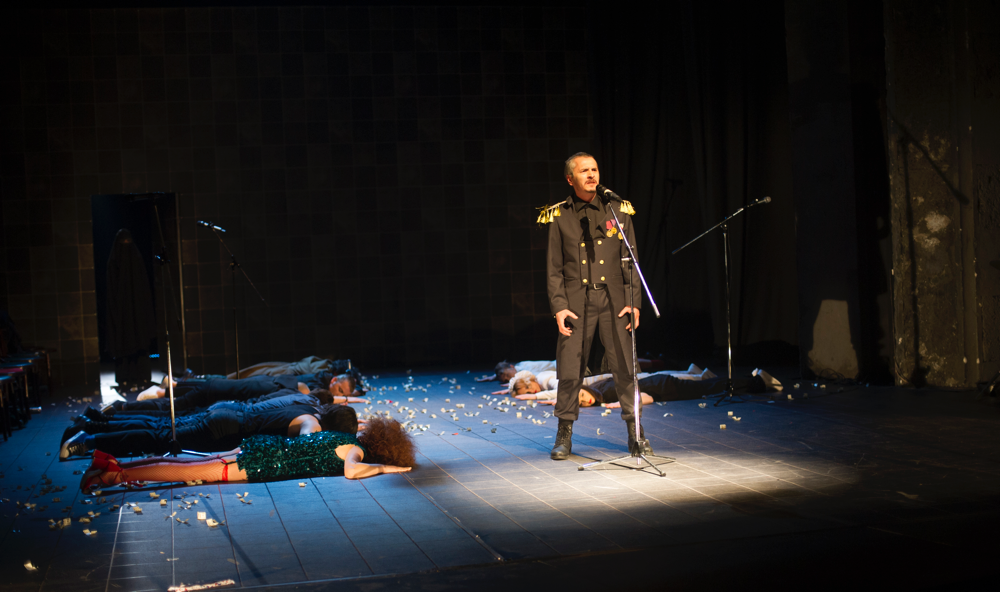 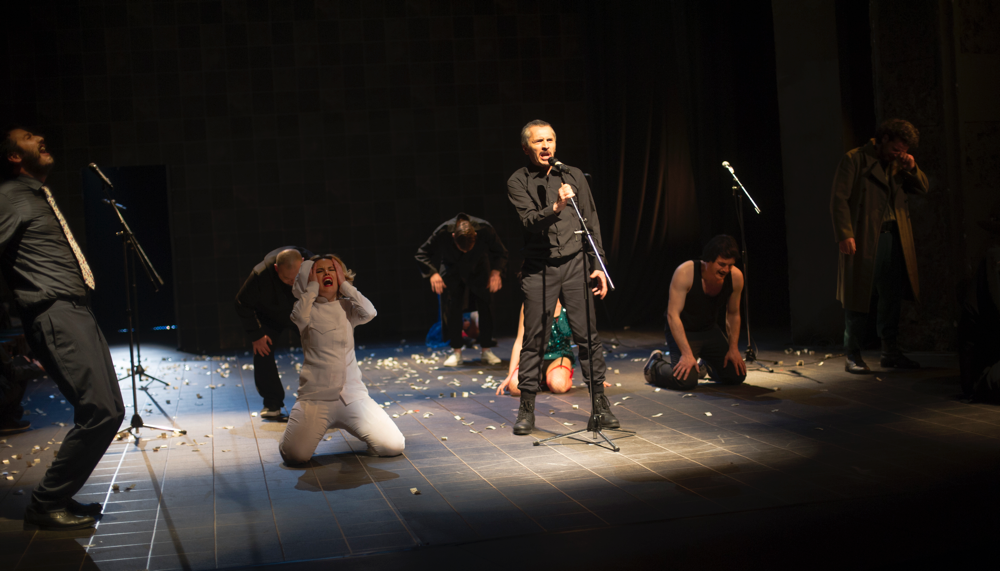 April 29, 2017
I attend a family wedding ceremony. In the restaurant where the ceremony takes place, I feel like being in a parallel world compared to the night before. 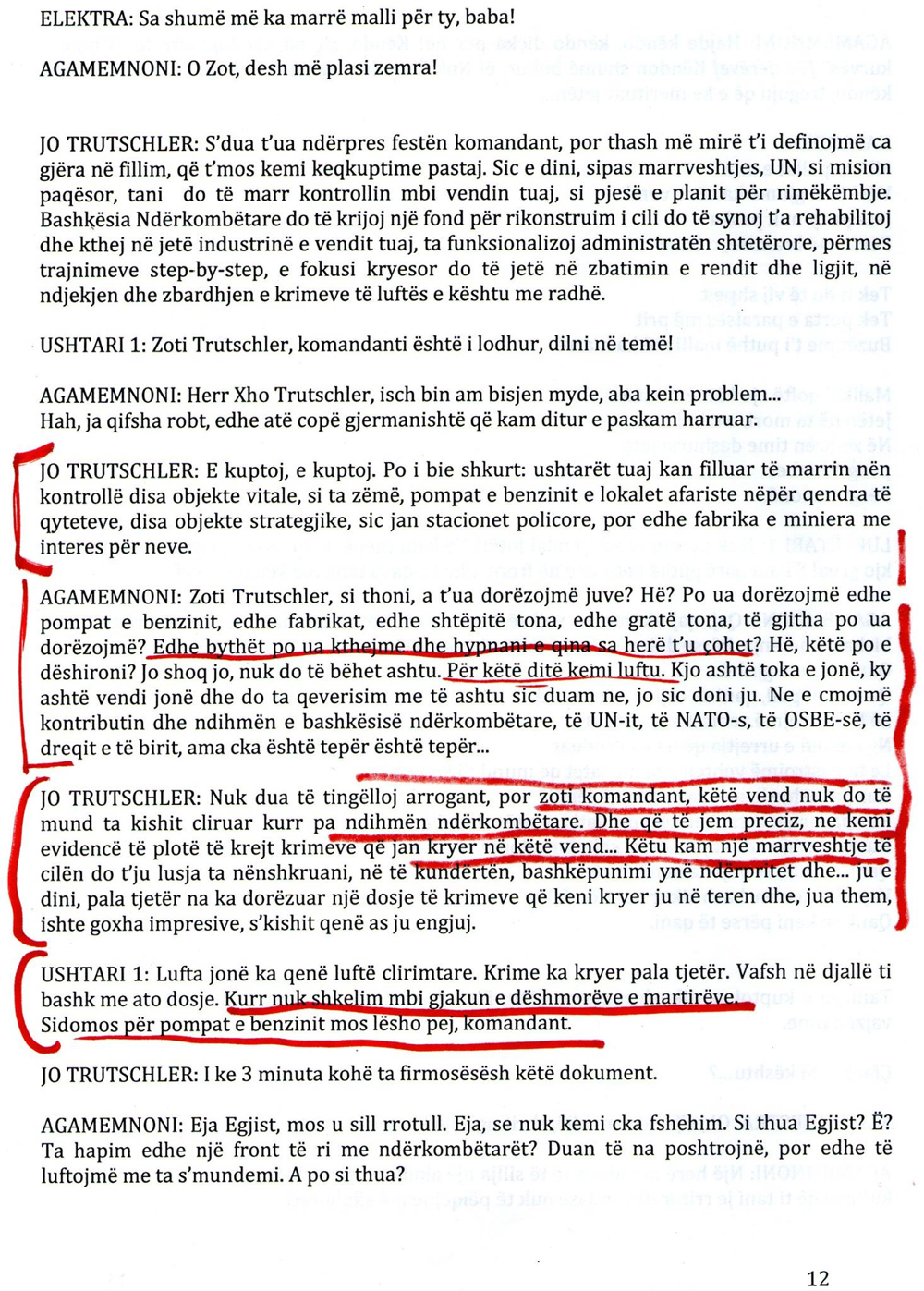 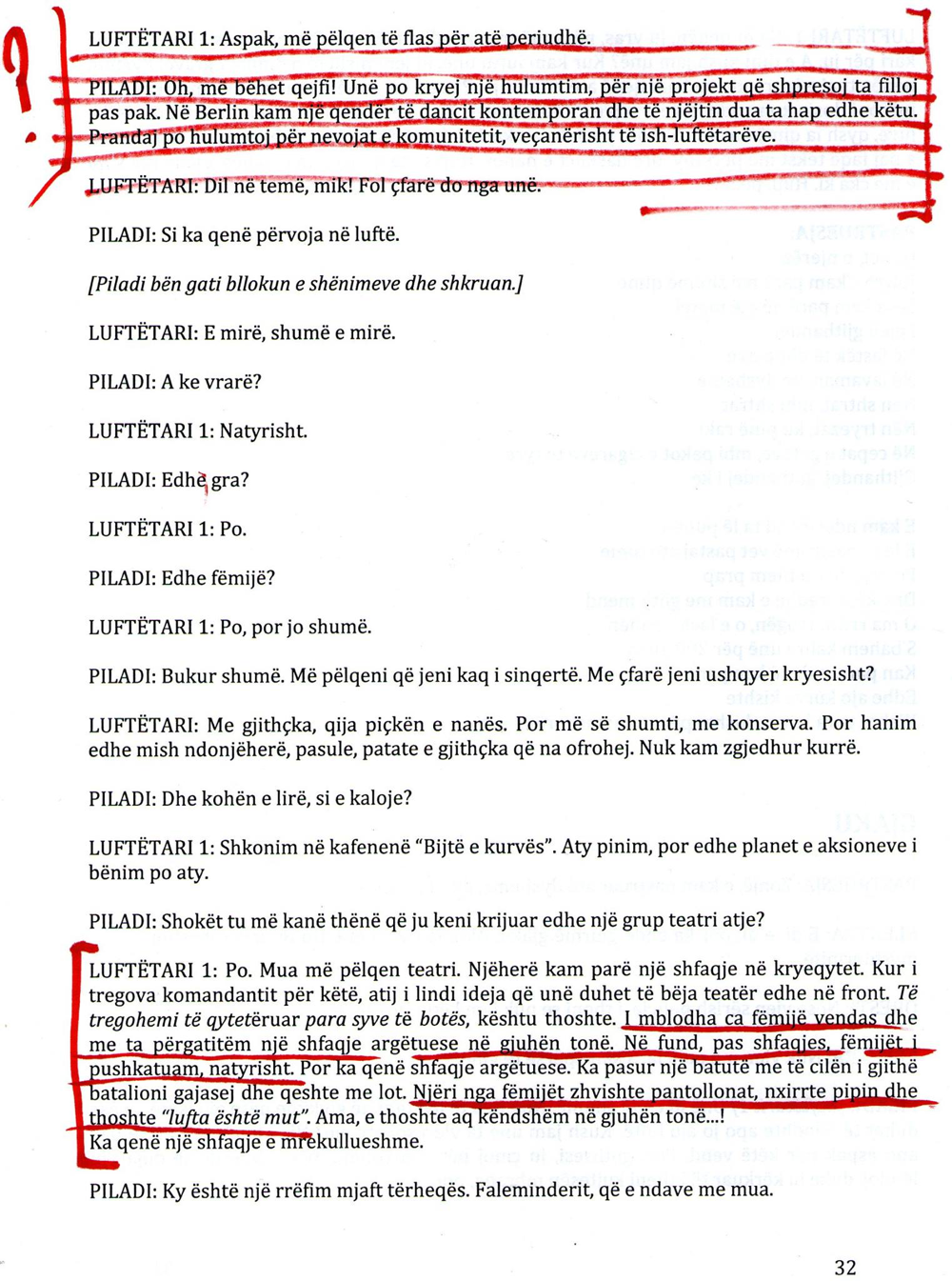 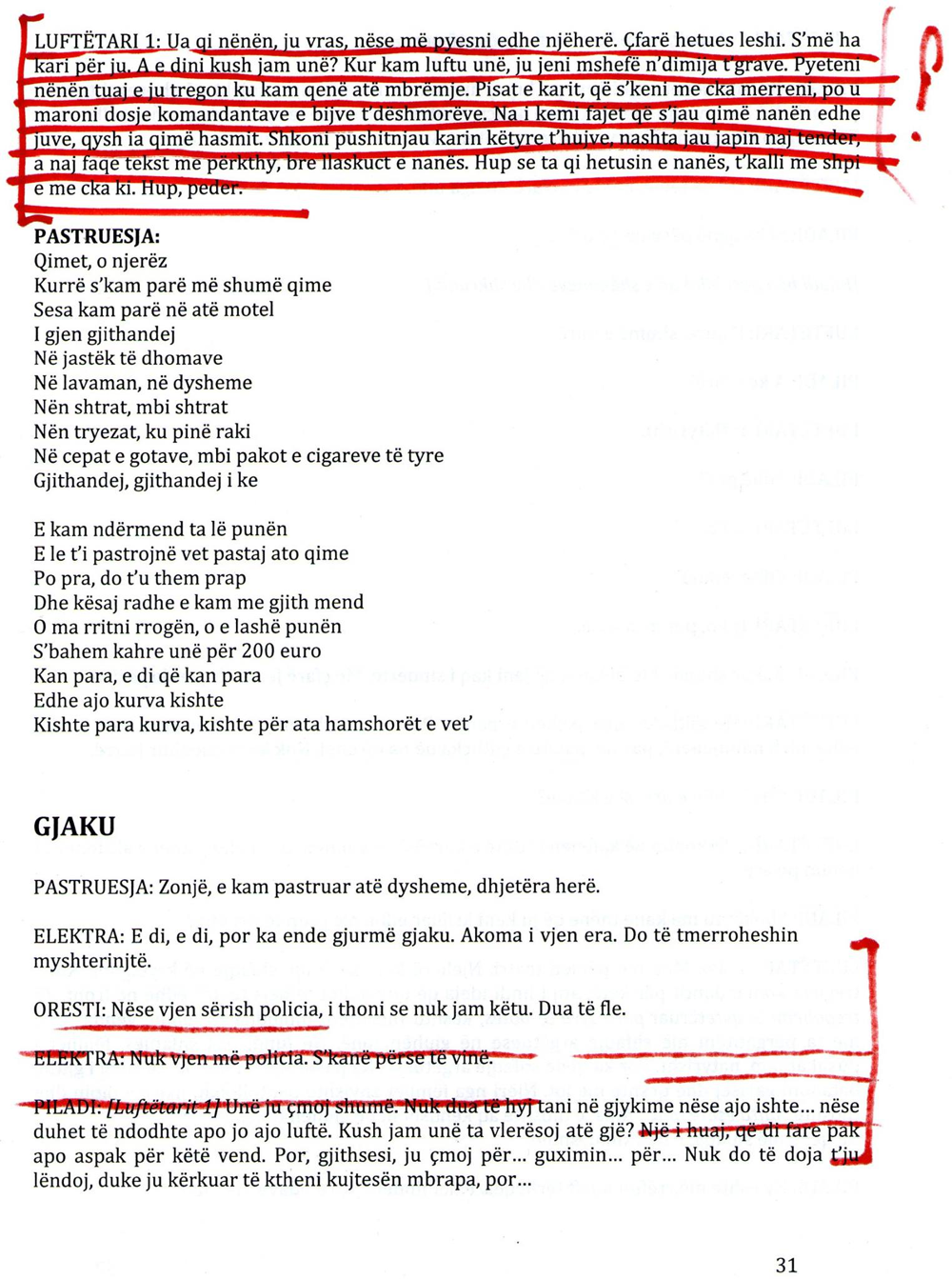 April 30, 2017
I sleep longer. I sleep during the day too. I am exhausted. I try to answer and thank everyone who wrote and supported me during these two days.

It is raining outside. I think of elections in France. The result there is not as optimistic as it was thought.

Another week is over, I say.

Next performance is on May 2. I think to myself: it is the dawn of a new week.

They go as soldiers, they return like wolves
More go, and few return
They keep the homeland in the corner of their heart
At the distant front of that hostile land
They kill for the homeland, they are killed for the homeland

Whoever is lucky, returns alive
Complete or crippled
In glory, the Homeland covers them
And under that glory, piles of money stick to them
Looting heals the trauma of war
As time heals a wound.

Jeton Neziraj Jeton Neziraj was the Artistic Director of the National Theatre of Kosovo and now he is the Director of Qendra Multimedia, an independent theater company focused on contemporary drama and theater. He has written over 20 plays that have been staged (over 40 productions) and performed in Europe as well as in the USA. His plays and his writings have been translated and published in more than 15 languages. Neziraj is the author of many articles on cultural and political issues, published in local and international magazines and journals. His plays have been performed in many important theatre festivals in Europe.
www.jetonneziraj.com