February 13th, 2017
We are currently working in Istanbul on a text by the Kurdish author Mirza Metin entitled ZWISCHENHALT/ARA DURAK/RAWESTGEHARAF (D/TR/KUR). We – that is a team of 3 Turks, 3 Kurds and 3 Germans. We need twice as long for everything, because some of us neither speak nor understand English. And so Ceyda, Hazni or Ekin translate our shallow English into lush Turkish and then back into simple English. The Kurds understand Turkish of course, because they are Turkish Kurds, but the Turks on the other hand understand no Kurdish at all. The text itself is about three men – a Turk, a Kurd and a German – who meet at a bus stop somewhere outside of a large city in the Western part of the East and the Eastern part of the West and wait there for the bus (in vain). They want to leave the country, want to flee, because a big storm is brewing. All three only speak their own respective mother tongues and actually also do so on stage. Like the characters, the actors do not understand each other and a constant non-understanding is acted out, experienced, masked, tolerated or simply negated. We laugh a lot!

On my daily journeys to rehearsal and back to my flat, I travel from Beyoğlu, Istanbul’s European neighborhood (the city in the Western part of the East and the Eastern part of the West) over the Bosporus to Kadıköy in Asian Istanbul in the morning and in the evening after the rehearsal return back to Europe. I almost exclusively hear Turkish, sometimes Arabic – seldom English and no real German. Unlike 12 months ago – when I began my scholarship in the artist-in-residence program of the Kunststiftung NRW in Istanbul in January 2016 – there are no or barely any Western tourists. Fear of possible further attacks! Last year alone, there were 4 major suicide attacks in Istanbul and aside from the lack of visitors, what is particularly striking is the constant rise in public police presence. Although the attacks always also leave their mark on the population itself, the military coup in July and its dramatic effects on daily life are infinitely more relevant for and in the minds of people.

February 14th, 2017
The pace is crazy on the oh-so famous and yet so disappointing, wide Istiklal Caddessi. Once planned and built as a French-style promenade with magnificent art nouveau buildings, lots of passageways, which lead deep into the buildings and a multitude of trees in front of the houses. Some of all this still remains as remnants in the facades. In order to find my own approach to the city, I have taken up reading Orhan Pamuk’s Istanbul novels (THE MUSEUM OF INNOCENCE and THE STRANGENESS IN MY MIND), in which he describes his Beyoğlu of the seventies and eighties – giving me an idea of this fading neighborhood.

Today the street has lost all its trees and is dominated by Zara, Mango, H&M, Starbucks and numerous telephone shops… granted, these are normal processes of westernization.

And yet the street remains an important central space – for meetings, for gatherings and for protest. The Saturday Mothers – Kurdish women, all of them mothers, sisters and wives, demonstrate there every Saturday morning, meanwhile for more than 630 weeks, inquiring after their missing men. Always under observation by a hundred police in full gear. 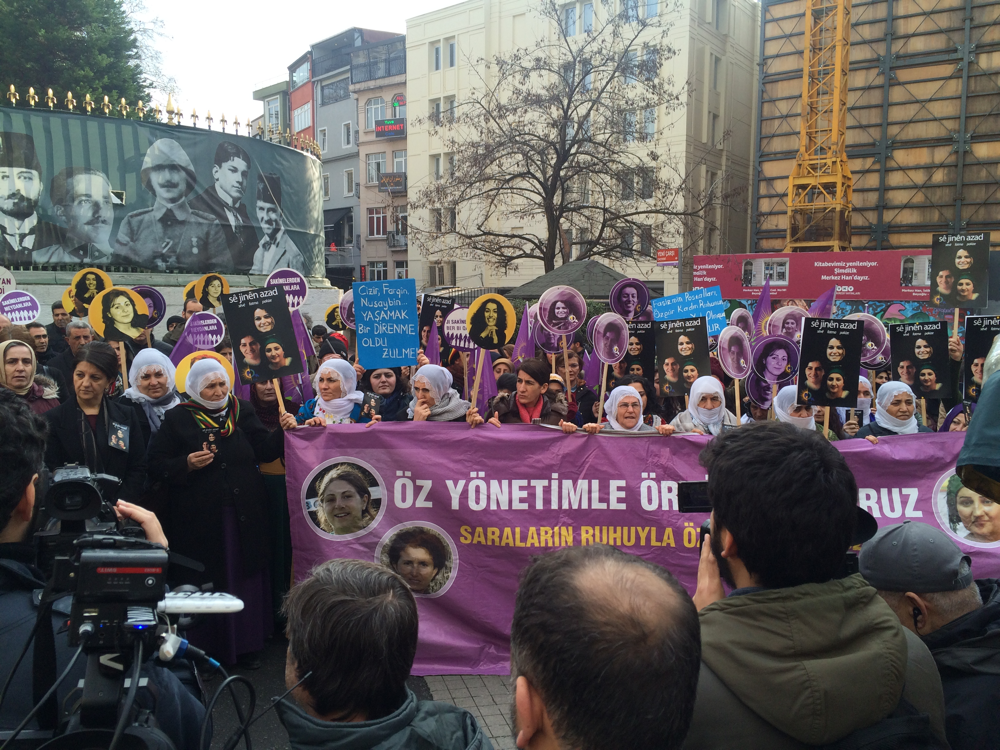 On my way to rehearsal today, a huge contingent of military and police were blocking every side street of the Istiklal, even the smallest alley. It was impossible for me to find out anything about the reason for the operation – like probably all other civilians. Ever since I was detained for a short while last year – I was caught between protestors and police lines shooting tear gas and subsequently subjected to a background check – increased police presence puts me on alert. What still surprises me is the degree of stoicism and nonchalance with which the Turkish population continues on its way and apparently accepts the situation as entirely normal. It shocks me that people are becoming so accustomed to a public military presence.

February 15th, 2017
I am very touched by the fate of Aslı Erdoğan. For those, who don’t know: Aslı Erdoğan is a Turkish author, who was imprisoned in September last year. She was accused of being a member of a terrorist association and now faces a potential life sentence. She was charged with reporting in an online journal on military operations against Kurds in Anatolia. After 4 months, she was released – now she no longer has a passport, cannot/is not allowed to leave the country and is waiting for her trial.

I first discovered this author during my first research phase in Istanbul 2 months ago. After reading a lot of Pamuk, I wanted to also read a female Turkish author. In this extremely male dominated Turkish society, I was missing a female voice/perspective in so many ways. I then found a copy of the MIRACULOUS MANDARIN in the farthest back corner of the German-Turkish bookstore (an important meeting place for many people). Another one of her novels, which has been translated into German and English, is THE CITY IN CRIMSON CLOAK. The momentum and radicalism combined with the unwieldiness of her language completely surprised and interested me very much. I then tried to get into contact with her via a Swiss publisher – but because of she wasn’t in the best of health, we never had a meeting.

Aslı Erdoğan was relatively unknown before even in Turkey – now, her incarceration has turned her into a symbol of resistance against despotism. In an interview, which she gave in late January, she said that she is quasi “against her own free will and reason” so intertwined with this country that she wouldn’t want to leave even if she could. Her reason: the language, which she needs around her.

February 16th, 2017
Here and especially now that the cleansings have reached the theaters in a very sensitive and important point – namely that of education – I feel the proximity of despair and decency. Decency in the sense that artists continue working. They have developed an attitude towards the disaster and it is a good one – not an acceptance and normalization of the situation, but an active watchful, vigilance, which is aware of the risks attached and what it means for their work. The work resembles ours in many ways and yet is still very different.

February 17th, 2017
We are looking forward to our premiere here in Istanbul: ZWISCHENHALT//ARA DURAK//RAWESTGEHARAF by Mirza Metin alludes to the current situation in Turkey; three men – a Turk, a Kurd and a German – meet at a bus stop somewhere outside of Istanbul during their attempt to flee the country. They are unable to communicate with one another. If there is one thing that I learned during my 8-month residency here, it is that in spite of the disaster and all the despair, both the Turks as well as the Kurds can still laugh about it and also do so often. And this is also the case with ZWISCHENHALT – it is rife with absurd comedy. That the piece will be presented to the German public one day later at the Residenztheater in Munich in form of a staged reading makes us even happier. 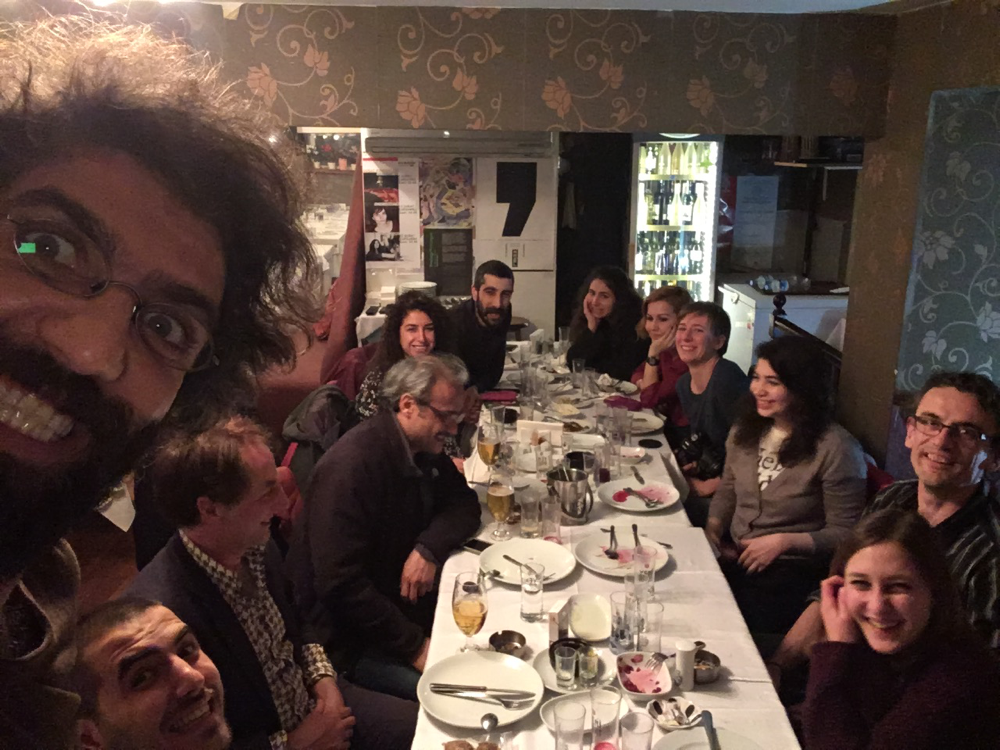 The sun is shining for the first time in weeks and I was able to enjoy it for a few hours. 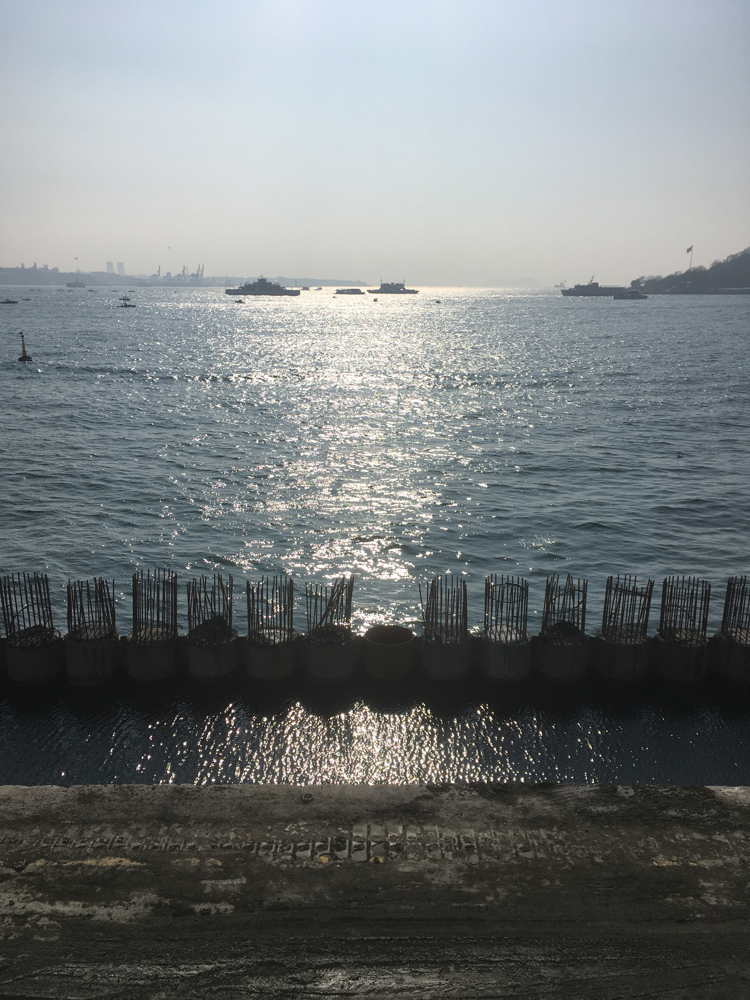 The city is simply amazing even amidst all this disaster.

February 19th, 2017
Spring has arrived. The people on the streets are in high spirits. The Istiklal is packed. The police are now merely guarding the entrance to the Catholic church. Everything seems all right for a moment. But there is something simmering under the pavement – the society is more divided than every before. The referendum on the presidential system is approaching in early April and the Turks are still almost 60% against it. The AKP will try everything (!) to change that. I am happy that I will no longer be in Istanbul in March.

My departure after a total of 8 months spread out over more than a year is imminent. I have met many, very many people, gained insights into a scene with its back to the wall and dependent on various different contacts abroad. The situation for them may still get worse. I am looking forward to going home; this city saps your energy and after producing three pieces here I need my own language, my accustomed working conditions and people around me, who I’ve know for a long time. But the city is also so fascinating that I look forward to coming back and seeing my new friends again and tackling the next project.

Frank Heuel is a freelance director and the artistic director of the fringe ensemble, Bonn. His productions, which have partly been developed abroad (Latvia, The Netherlands, Switzerland, Poland, Ghana and Turkey) have been invited to numerous festivals. From 2011 to 2013 he was part of the artistic direction of Schaubühne Lindenfels, Leipzig. In 2016-17 he participated in the program "artist-in-residence Istanbul" by Kunststiftung NRW. During this residency he realized a production series with Turkish and German artists.
www.frank-heuel.de