One of life's great challenges is to be able to appreciate it when life is good. Especially for someone like me – life is nearly always good to me.

We're on holidays. Yesterday I went to one of those surf places, rented gear to go kitesurfing and went out with the staff and some other tourists. The wind was too weak and we could not really get it on. I was only charged half the fare as the wind had failed. Some other days the wind is there, fully-fledged, but there are no customers. I find it heartbreaking that the fortunes of the guides and all the others in the tourist industry here should be at the mercy of the wind and our haphazard desires. In fact it moves me in the same way as when I read about mothers having to choose which child to feed, and thus which children to abandon to death, in the ongoing crisis in large parts of Africa (according to the UN – the greatest humanitarian crisis since WWII). My compassion has no ability to scale with the magnitude of tragedy.

Everywhere I look there is wealth and prosperity. Our civilization is a tremendous feat. My children are growing up in such security and privilege that no roman emperor would have been able to fathom. Yet I sense an underlying great sadness. Someone's daily bread being subject to the wind or the whimsies of tourist's trends, shatters the veneer of prosperity and security for me.

Why is it so? I find it hard to be optimistic for the course of our species. Is it just me? I believe this feeling to be justified, to be the result of some rational analysis. In my time there has been tremendous progress. Just like the late Hans Rosling has been professing – more and more people are emerging out of poverty and entering the middle class, with all its comforts and opportunities. I was born into the middle class. I have taken its benefits for granted. I have grown up in a state with social structures so amazing that even the most naive revolutionary would not deem them realistic. In fact even we, who have grown up with these benefits and have always taken them for granted, do not find them to be credible. Thus we now vote for right wing parties that strive to dismantle these very structures. In our little corner of the world every measurable factor has moved in only one direction; we live longer, are healthier, there is less crime, we are more educated... despite all the efforts of the media to convince us otherwise, there is far less terrorism (was there ever a more meaningless term?) So, what the hell is the problem? Why is it all soaked in melancholia?

There is the obvious loom of climate change, dying oceans and rainforests, water shortage, depletion of natural resources, political and religious extremism and of course – nuclear war!
Despite all this, I still think I would have been able to remain optimistic.

I think what bothers me is that I am part of the middle class. We have achieved the most magnificent state of society imaginable, a place where nearly everyone has a chance at a secure and dignified existence. But our souls are still tainted by the Roman empire. We don't want to be decent, common working people, with stable revenues, pension plans, station wagons and a cottage by the sea. We want to be rock stars, Nobel laureates, surfers, acclaimed artists, adventurers ... centurions, gladiators and emperors.

I wanted to escape my deterministic fate as the child of academics in the upper middle class. I became a carpenter. My first idea was to be one of those people in orange clothes that dig and fill holes in the roads. It was the most exotic, unavailable and mysterious career I could envision. I had no idea how to go about getting there. Meanwhile I traveled the world, exploiting student loans, my family and friends, doing odd jobs. I had the identity of an artist, sitting in the bars scribbling in my little notebooks. And this is how I met a guy who was actually a craftsman. He led me to another guy and within a few days I was out climbing scaffolds, getting my clothing and fingernails dirty.

It took me nearly twenty years to accumulate a terrible bitterness and anger, over having honed myself to be a perfect tool for the pathetic and self-absorbed designer home fantasies of my peers. I possess a desperately demanded qualifications in our time and place: I am actually able to use my hands and accomplish a qualified piece of real, physical and tangible work. And I am abandoning it. For good I think. It is a fact that our society does neither respect nor appreciate honest, decent workers. There is nothing but contempt for all of those who actually do the real work in our society – all the people who tend to the sick and old, drive the buses, educate the children and those who build the houses. I think I could deal with that contempt. I have such arrogance that I almost thrive in the disdain of others. Sadly I am prone to feel a little of the same about myself as the common, decent worker as the rest of society does. I am sick of doing the real work, the work that really is needed, but that nobody, including myself, really appreciates.

My great shame should be that I am not far more politically engaged: I don't do much for those in need, I am no champion for the weak and the needy, and I am doing nothing to save my children and my grandchildren from what is surely to come. Not that I don't feel shame. I have shame in abundance, I'm just worried (ashamed maybe?) that my ego hangs it on me not achieving the illustrious stardom. What this would be composed of I don't know. For many years I thought it was writing a grand novel, but I guess I might as well have skied across Greenland or scaled Mount Everest ....

But in the end everything in my life is good. I have more than anyone could ever dream of. My children are healthy and happy, my wife is much better company than I ever deserved (I shall not embarrass her by going on about how beautiful and fantastic she is), we have wealth, security, friends and family.

May God help us all.... Either that or that the wind gets going for real – so I can get out on the water ... 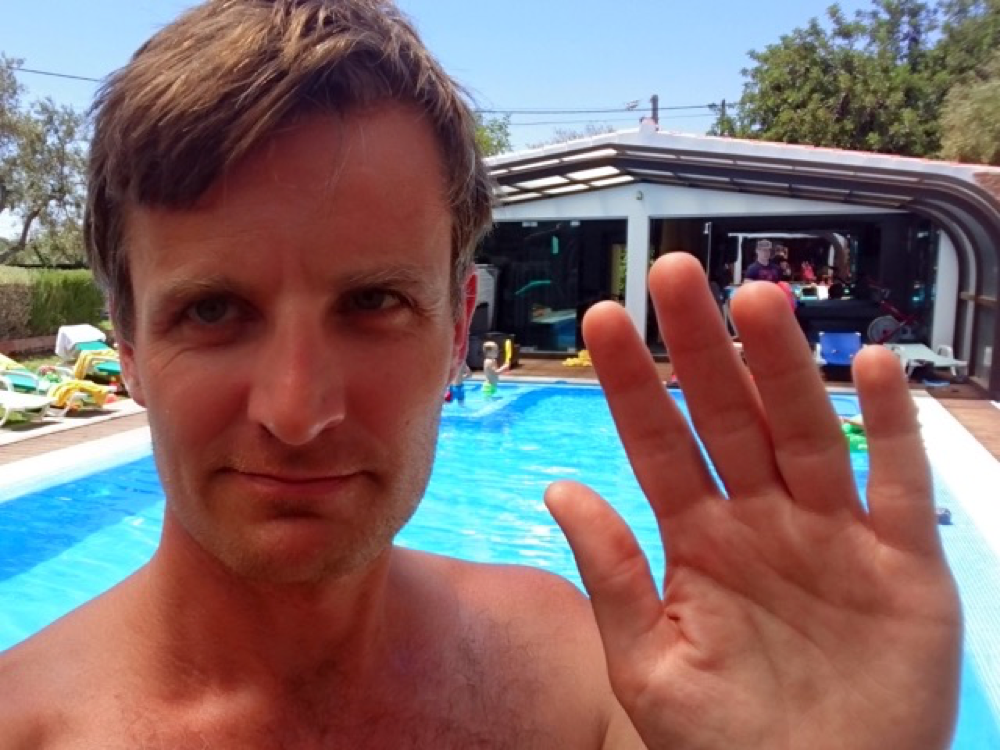